We’ve been a little boring of late with days being short so we’ve not done any big trips.  The weather has been decent unlike on the other side of La Manche. 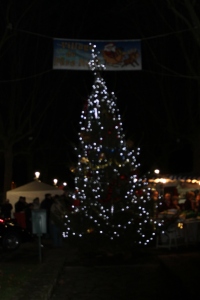 Friday night we went into SYlP for the turning on of the Xmas lights.  The Place de la Nation has sheds along the centre with stalls selling various artisan type things plus duck, snails, foie gras, vin chaud etc..  Pere Noel was wandering about giving sweets to the kids and the Mayor was there.  There was a countdown in French which was more than a little difficult for us to think thru.  Once the lights went on free drinks and nibbles appeared and the atmosphere was really good.  It appears Pere Noel arrived in an MG which was cool, S had some warm wine just to be polite.

Saturday we were doing some Xmas shopping in town when we happened across a Run which featured almost all the runners wearing normal running garb which was a little disappointing, not a as much of a Santa run as I hoped.  The Rovers lost again – it’s the French fitba winter break so I have nothing to distract me fitba wise from the under performance of the Rovers… 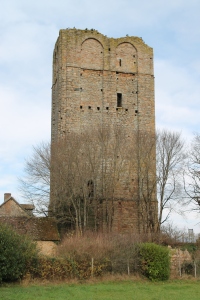 On Sunday we went to Chateau Cervix – which isn’t pronounced as its spelt thank goodness.  It’s a nice wee village and we had a little potter around.  The Chateau itself is not that accessible apart from walking around to it from where you can park and the underfoot conditions were not perfect so we took some photo’s.  It may be another painting if it takes S’s fancy.  We went back via an intentional but long route, pausing in St Priest Ligoure as S was looking for pics to base a picture on we stopped finding one of the thing she wanted then discovered there were dozens about fifty yards down the road.  She’s been very productive doing paintings over here now we are time rich.

In St Priest Ligoure there was a rather cool looking Chateau which seemed to be up a road marked Lavergne which a certain Martin from the fitba may be jealous of. 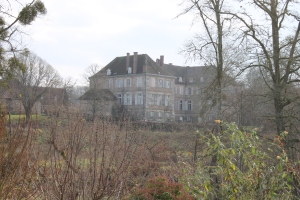 On Tuesday S went to the Ballet.  Or rather she went to the Cinema with Jan one of our hosts.  They were doing a live stream of Alice in Wonderland from London.  Darcey Bussell was presenting and despite it being nearly three hours S enjoyed it.  SYlP was one of 1300 cinema’s streaming or similcasting (if that’s a word).

On Wednesday we had a rather pleasant lunch in SYlP – largely funded by June, TA!  We then went to the Village de Porcelain which was not made of porcelain which was a disappointment for me as it was raining and I though the noise of the drops on the roof would have sounded brilliant.  We did the Museum where I delayed the beginning of the Tour going to the loo which was a little embarrassing.  The Tour Guide was rather an old chap and spoke away in French about the displays not that we were able to understand him.  The shop was much more understandable and stocked with thousands of examples of the crockery.  Fortunately there was more space there so I didn’t nearly break anything unlike in the more confined shop in town.

On Thursday and Friday we separately did some shopping for the festives.  We had a largely quiet weekend stocking up for the visit of S’s sister and hubby for a few days.  On Saturday we went to the Xmas Market at the Chateau in Coussac Boneval which was rather cool.  There were Carols in the Chateau which meant we crossed the draw bridge and got into the castle courtyard tho pictures are not allowed.

S has been taking it easy due to her back and leg playing up.  So we’ve spent a little time in front of the wood burner watching silly films.  S had wanted to watch a Xmas movie for a few years and now is catching up or so she claims.  I however have no excuse!  L  As a public service to you all we’ve watched a few now see out thoughts below, so you guys can make informed choices – doing the hard work so you don’t have too!

Uncover Xmas – You can guess the basics, crooks streetwise gal under protection of FBI guy over the holidays.  Throw in Tyne Daley (from Cagney & Lacey), a surprisingly good script and pleasing performances equals a decent film, well done.

That Aunt you never see has done good this year.

A Christmas Romance – Olivia Newton John doesn’t sing except for a moment, poor story, plot holes, nothing to the performances.  Dreadful.

Return unopened, before the January sales.

The Christmas Gift – John Denver stars and sings (once).  Either the editing room floor was knee deep or they forgot to write some scenes as the plot such that it was jumped along quicker than credible.  A few faces we recognised but utter, utter guff.                      Pressie from £ shop!

This service to both our readers has been more testing than we anticipated so you’d better benefit cos we didn’t!

PS – There was a frost this morning – Monday – and it was very pretty and novel in these Southern climes.  The warm sun quickly got rid of most of it.