This time’s animals are a red squirrel and 2 coypu’s, (maybe)…

Sarlat de Caneda was the destination of our first trip since the last update.  We headed south down the D704 into the Dordogne and ended up by mistake at a place we plan to go to some other time.  Continuing we got to the right place and parked up after paying to do so!  This is rare here and wasn’t expensive.  Sarlat is clearly used to a visitor or two to its formerly walled centre.  There are a few foie gras shops, quite a few in fact but it is lovely stuff!  It was a little overcast and tried to spot with rain but we wandered about having a good look.  We went to a museum in one of the old 14th Century houses which was rather more interesting than it sounds but that was after lunch at the La Regent.  I had an excellent comfit of duck as S ate an omelette; having passed on a starter we of course had puddings – chocolate fondant for me and chocolate mousse for the Mrs. 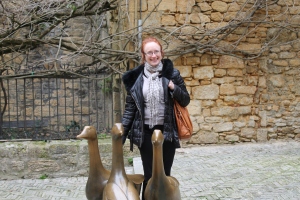 Sarlat is a nice place with lots of pretty old buildings and wee lanes in the centre and some interesting shops.  Again there was a War Memorial with a section detailing those deported but who didn’t return, over a hundred including a disturbing number of women and children…  😦 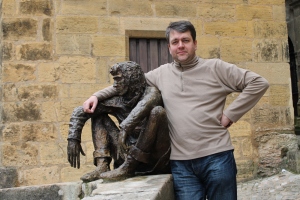 Taking advantage of a rather nicer day we went for a wee run to Pierre-Buffiere where we had a wander – no sit down lunch but a wee trip to a Boulangerie for a light lunch of mini-quiche and cake.  Pierre-Buffiere used to be on the coach route between Limoges and Toulouse where they changed horses and stopped for the night.  There used to be two castles of which little now remains.

Pierre-Buffire’s most famous son, Guillaume Dupuytren, was a leading light in the field of anatomy and study of that sort.  He donated a wodge of cash to his home town resulting in a nice park with a fountain and then followed a statue of him.  They statue and the ornate fountain were both removed in 1942 by the Nazi’s no doubt to be melted down for less savoury purposes…  The old pictures of both made me think I preferred their original use – I/we don’t seek out these things but it’s something that I’d never have thought of despite knowing railings were taken in the UK for similar purposes.

Just outside Pierre-Buffiere S saw two animals trudging purposefully across a field – her first guess of moles was quickly discounted (she’s a city girl) but after some research we reckon they were coypu’s tho I didn’t see them.

There was a superb sunset the other day; it went from pink to orange – very pretty.  The clear night’s mean you can see the stars clearly all the ones I’d seen before and many, many more.  The old line about evidence of intelligent life elsewhere being confirmed by this planet being ignored these other beings has always seemed reasonable to me…

We went to see Kingsman in French, half of the four people there on the cheap night!  Was fun and Colin Firth doing fights was a change.  Not a massive plot to follow but we more or less kept up with things.

Practicalities dictated a trip to the bank and another session with Sixteen which sorted out an address change in no time.  It’s been easier and more efficient each trip which must indicate some progress with the lingo.  We lunched in town at the Vice Versa where S was provided with what she said was a very tasty vegetable risotto which wasn’t on the Menu de Jour.  I had no such worries and piled into the salad then  Provencal pork with pasta followed by a light pear and yoghurt pudding.  All rather nice.

Wednesday and Thursday of last week were glorious.  Clear blue skies, sunny, bright and heading for 20 degrees, (a thing in town said 23.5 but it wasn’t that hot).  I did a walk to the re-cycling (on the 12th) in a short sleeved top the first time since the 30th of November.  It’s been a bit more overcast the last few days and the clear days have led to a slight frost overnight but it’s all very civilised.  My tan normally doesn’t begin this early.  Jan and Keith have been busy taking down a neighbour’s tree and I’ve been their trainee, junior assistant helping them clear up.  I wandered along the side of La Porcherie I saw a red squirrel scamper towards the pool bar.  Jan had seen one in eleven years here and Keith hasn’t seen one in that time – which made me feel a bit bad.

Is it me or has Lego got bigger?

The famous and tasty Limousin cattle were being judged at the Cattle Mart down the road.  We wandered along the line of bovines which seemed a little confused by rosettes that were plonked between their eyes.  A couple were obviously shy wearing blindfolds made of sacking.  Bullocks I hear you cry and you’d be correct.  Anyway they were all very well turned out, clean and brushed.  Some had been shaved a little along their backs, presumably to show off their physique.  We’ve seen a couple since back in the fields looking a bit overly done up.  All dressed up but nowhere to go poor lads…

Sunday the 8th saw me do the short trip to Ladignac le Long for a sunny afternoon some cup or other Quarter Final against Limoges 2.  There were about sixty people at the game and the full complement of, count them, three officials.  It was warm as far as I was concerned but I’ll admit to being the only person there in a short sleeved t-shirt who wasn’t on the pitch.  Limoges 2 unsurprisingly won 4:1 however the game was more even than the result indicated.  Limoges FC is the area’s biggest team by some way and their Second string had young talent aided by a couple of older, wiser players.  The visitors got an early goal and it was never in doubt from then on.  The home side were decent enough and created as many chances but lacked quality at the key moments.

Oddly one of the LlL midfielders looked the spitting image of a guy who goes to the Rovers now and again – it wasn’t him tho.

Last night (Saturday 14th) saw my 7th trip along the road to see St Yrieix.  Earlier in the day S and I were in a shop Le Caveau de Bacchus looking for a B’day pressie for no-one in particular (not that he’ll be reading this bit).  Anyway on previous visits I thought the chap looked like one of the SYlP players.  I enquired as there was only him and S to make a fool of myself in front of and sure enough I was right for a change.  He said that they were experimenting for the derby game with a couple of changes and agreed that goalkeeper had been a problem position.  He seemed pleased that some daft Scottish bloke had started going along.  The guy concerned is a decent player with good pace and a first touch that would shame a lot of Scottish Championship players.  Despite the low level I’m watching week in week out the players are often pretty good technically.

So to the match.  The visitors were La Roche L’Abeille 2 who are only a couple of k’s along the road from oor wee hoose.  It’s the ground I put some pics up on this electronic-tome previously.  Sadly I missed the away game just after we arrived not knowing it wasn’t very far away.  The Derby saw a larger crowd than normal of about forty and a reasonable number of away fans.  SYlP started on the front foot and the chap we’d spoken to earlier had the first chance.  My pal Jose wandered in after a couple of minutes and displayed his patience by joining me.

SYlP were the better side and despite numerous corners and half chances it was past the 40th minute before the deadlock was broken.  Ricardo the ever dangerous home number 9 got a yard on the angle and fired past the stationary keeper.  This prompted me to say the guy was like a rabbit in the headlights which took a while to translate believe me!

In the second half the home captain sent a looping header up and over from a corner into the back of the net sealing the win 2:0.  Jose was a little surprised when I pointed out our colleague from the stand was now the SYlP guardien de but.  He however dealt with all he needed to without incident.

The car has been being a bit odd gearswise.  Which has been a bit of a concern.  Jean-Mark one of our neighbours was unable to assist not having the kit to check it out as he works at a VW garage.  So we went to the local Ford place and sorted a rendezvous for it (it’s never had a name).  This sort of discussion is a bit different from the normal ones we have out and about but the initial assessment wasn’t too bad and further work – a not much cost – will hopefully sort out the issue. 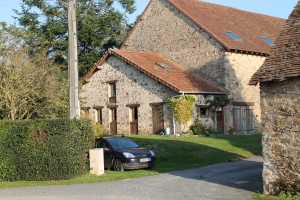 To see what happens next see the next update – he said feebly trying to generate suspense and intrigue, etc…