Experience has taught us that when heading over to stay with or near Brit hosts it is important to ask if there is anything they crave from the UK. We arrived in the hamlet of Gondandeix with tins of Heinz Tomato Soup. This is not a hint to potential visitors… Well it wasn’t intended to be but now I think about it feel free to ask if ever heading our way!
Anyway, with Mitzy recovering from her journey and us a day earlier in situ in 87500 – which is the French post code for hereabouts – we unpacked further and began the process of waiting for confirmation of the date for the purchase of our new French abode, anticipating it would be early November at the latest. On our first full day we drove past to check the hoose was still in one piece which pleasingly it was.

In the mean time we were to be Chez Kay and Paul in a converted stable. It does the job rather splendidly and gave me the opportunity to get back into the swing of tending to a wood burner not that this was a prime consideration in mid-October. We have French TV so are missing … frankly nothing much that we watched in the UK. It gives us the opportunity to try and polish up our French a bit and watch some stuff we wouldn’t normally. It also means we can see what Jonny Hallyday, Jenifer, Trois Café Gourmands and the rather splendid Fatal Bazooka look like from their videos. I am yet to knock any sense into myself in the upstairs portions of our wee hoose on the angled ceilings, S has not yet had a problem for height related reasons. Mitzy settled in rapidly, enjoying sitting making faces at the many birds that like to welcome the dawn in the trees outside. She was not at this stage not bothered about not being allowed out but we wondered how long that would last for our wee prisoner of stable block H, (pronounced ach here).

S before we escaped the sun

Knowing this neck of the woods as we do we were quickly back into the swing of going to the shops and getting what we needed. There have been a couple of changes in shops since we were in Saint Yrieix la Perche for eleven months with a cheese shop opening and the arrival of a McDonalds which we haven’t yet got around to visiting. We did however over the first few days visit a few of the café’s so S could re-establish which had the best coffee and had lunch in the Vice Versa her fave. Posters at the roadside told of a Marche de Producteurs D’Automne on Saturday the 20th. Celebrating local produce like the apples and white chestnuts produced in the area. Not wanting to miss out on the first event since our arrival we toddled along on a glorious day with the temperature in the low to mid-twenties. So sunny was it that we after our initial lap of the stalls we nabbed a place at a long table under cover where an old couple were settling down for the afternoon. Like professionals they were equipped with picnic plates, cutlery and their medication required to taken before food. I got a sausage and just missed out on the last of very few bits of veggie pizza. Thus plan B was enacted for S’s lunch and after the chef who apparently features on local TV assured me the chestnut soup was veggie I was unable to have some lardons (wee thick slices like bacon) added to his offering. We both like chestnut soup it turns out tho I doubt that the addition of lovely lardons would have done anything but improve it for me…

It was interesting seeing a few faces we recognised from events we’d been to in the past and we had another wander around. During which we learnt that the Limousin has thirty-six (36!) different apple species. That theme continued with some rather elaborately decorated larger than life versions which were later auctioned for charity. We declined the opportunity to dive in as it were to the large crates full of several different varieties of pommes to take away with us. We did however get a bottle of very freshly pressed apple juice – like within half an hour tops – that Greek Gods may have scorned nectar in favour of.

That evening – as I knew I would be busy the next Saturday – I headed off up the D704 to see Limoges FC in action. See the specific footie update for all the details, or dinnae it’s up to you! We went to Pompadour after a wee drive as we refamiliarized ourselves with the area on the Sunday having a wee drink at Le Ramparts café across from the Chateau on another lovely day. 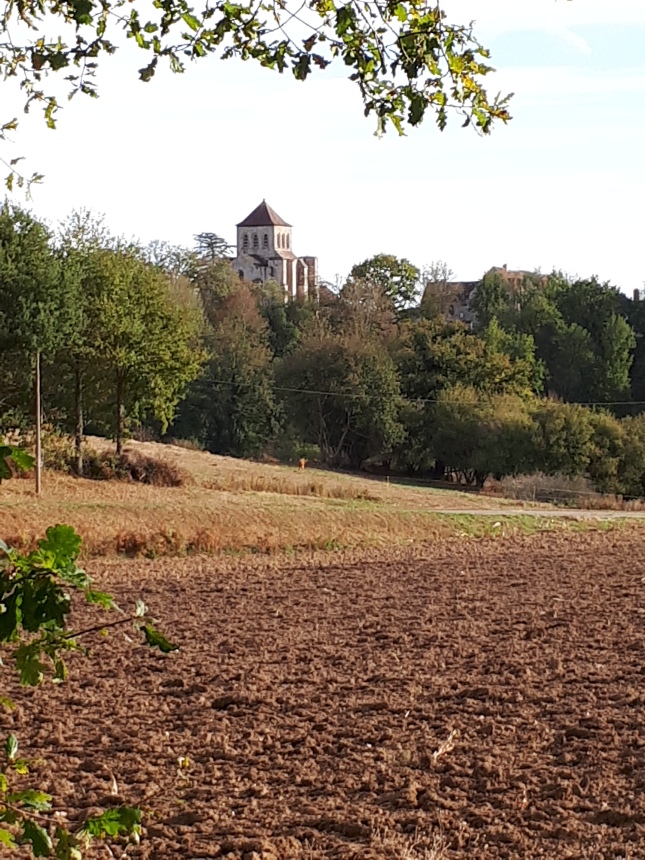 A couple of days later we walked into Le Chalard – the nearest village – along a path which was blocked by a fallen tree. Thus, we had to get all SAS style in our crawling under the one strand electric fence to continue. Ooohh the danger and daring do I hear you cry! As we dawdled up the hill through the village we were a little surprised to see a hardback graphic novel on the roadside. I propped it up against a wall so it would be more obvious to who-ever we thought must have dropped it.

A little further on we saw another then in the wee square on the steps was a third, Biggles Le Vol du Walkenstein in which he was in Scotland. Having been a fan of Biggles in my yoof – before I knew what racism and misogyny were – I flicked through it following the plot and not being massively surprised that the good guys, Biggles, Algy and Ginger saved the day. Oddly Ginger in the French version is not the character with ginger hair… The rest of our wander back to Gondandeix required much less pluck and adventurousness.

We knew from our previous stay that perhaps in honour of our friend Jan’s birthday, who we’d visited on the way south, cranes aka Grues migrate over in large numbers. Being a decent size and vocal – I suppose like your lowly scribe – they are often heard before they come into view. Their honk like calls prompt looks skyward as the latest flock go over in a large V formation.

If you are lucky, as we were with the first lot this year, they have a bit of a blether to each other and circle to get their bearings and then re-form into a group before departing for northern France and it turns out on to Poland. We were stood in the garden having spotted them when Kay our hostess came out to see them too. She is a fan and was pleased to hear we shared her interest. The cries from above punctuated the next ten days or so and S got this rather good pic on one of our wanders despite not really being able to see them properly. There are just over ninety in this V but we have seen groups of two and three times this size this year. It’s a very, very cool thing.