Due to S’s pending travels and our earlier arrival in the Haute Vienne I went to my first French match on the 20th of October, Limoges FC against Poitiers in the National 3. LFC were relegated due to off field problems last season from the National 2. I saw them twice last time we were over and monitored them prior and since. Getting there in plenty time to purchase traditional fayre I saw Alain of the Supporters Club who welcomed me warmly giving me my Membership card, he got a Raith Rovers keyring in return. I accompanied him to the wee area where they are trying to cultivate a bit of noise and was introduced to a number of people. All of them had names which ones was a mystery especially as he introduced someone else later using the wrong name to the amusement of the rest of us.

There has been a change of squad since last season so no familiar faces from my previous visits. Limoges have been doing ok, conceding few but not scoring many and drawn most of their League games but had progressed in the French Cup which I had hoped they would remain in for me to see. I recognised that their other keeper was playing and was surprised to see a youngster who’d been signed recently starting.

Any first game is about trying to see how a side operate and get an idea about the players. In what ended up being a 0:0 draw I learnt the following. The back-up keeper Cornet made a couple of very decent saves late on, the new youngster Faucher is very decent and playing out from the back is the norm – I ain’t knocking it the French seem not bad at fitba as this summer again proved… The home side couldn’t quite create an opportunity up front but looked reasonably solid across the middle and at the back. I also discovered that I default to French at St Lazare the LFC ground for the basics, allez, bonne, etc.. I was also reminded that French supporters expect to be stirred by the play on the pitch so I already knew that my efforts to encourage are often largely solos!
Limoges FC 0, Poitiers 0 – National 3 – French 5th Tier 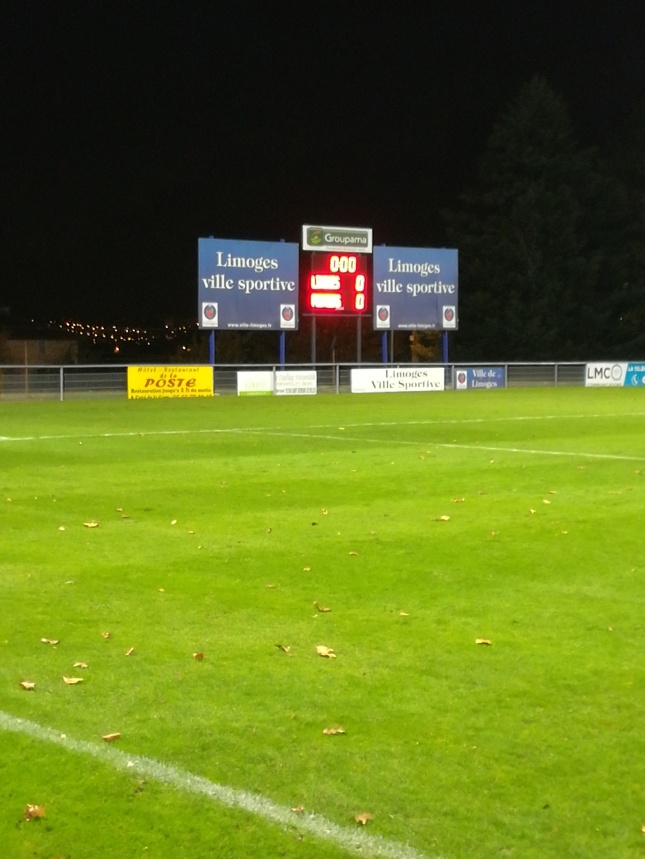 Next as S was away I went to an U16 game Limousin v the Dordogne in Lubersac.  Due to an error in the publicity I arrived in plenty of time for the 2.30 kick off. So much so I was the first person there other than the chap opening the bar and I was pleased to see some players arrive five minutes later. The game kicked off at 3.00 or rather 3.10… By which time I was concerned about the hot sun and had wandered around the pitch watching the youngsters warming up, which they did themselves rather than being instructed by a coach. Three mini-buses had brought guys from the Haute Vienne, Correze and Creuse while the visitors arrived on a coach.

Also I had been approached by one of the coaches – there weren’t more than a dozen fans – who seemed not to fancy the chances of his Limousin side. The players including the visitors right back who looked about 12 were pretty good. A wee lad like him in Scotland would have been dropped/kicked out the game by U16 level but there was no sign of that here. There was lots of playing out from the back and at half time it was 1:1 with the Dordogne side getting a goal back just before the half. Both number 6’s looked good, the visiting one in green was polished and skilful but only passed backwards – he reminded me a lot of Jean Philippe Javary but without the streak of mental genius – whereas the home lad in blue was much more tenacious and direct. 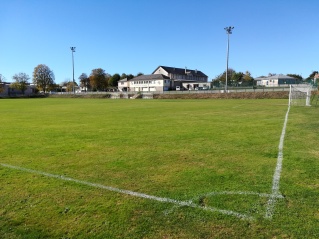 At the half I asked the Limousin coach if their keeper had a hat. He didn’t but wasn’t bothered it appeared at the prospect of playing facing the sun in the second half. Both the coach and I thought he should be more concerned. The home lads continued to do well and scored before being pegged back. Then a sub who’d shown good touches scored the goal of the game running through the middle and jinking past a defender before firing the ball in the top corner from the edge of the box. That more than justified my 4e total expenditure on drinks! As time ran down the greens scored two goals in the last four minutes one of which the Limousin keeper may have been better able to prevent … if he’d had a hat. The defeat I think was a little harsh on the Limousin side who despite being the underdogs matched the visitors throughout.

During our previous time here, I was a Saint Yrieix la Perche FC regular as they won promotion in the Haute Vienne pyramid – details of which are found in the older updates. Anyway, SYlP FC have struggled of late and having worked with AS Ladignac Le Long on the Youth side of things have sort of merged with them. Thus on a Saturday the 3rd I set off towards Ladignac to see them play and realised – cos I’m stupid – that they would be playing at the SYlP ground which is rather better than the AS L facility. As SYlP came into view I could see the glow up the hill of the lights and arriving a couple of minutes in joined a few dozen fans to watch the game against Chateauneuf Neuvic B. 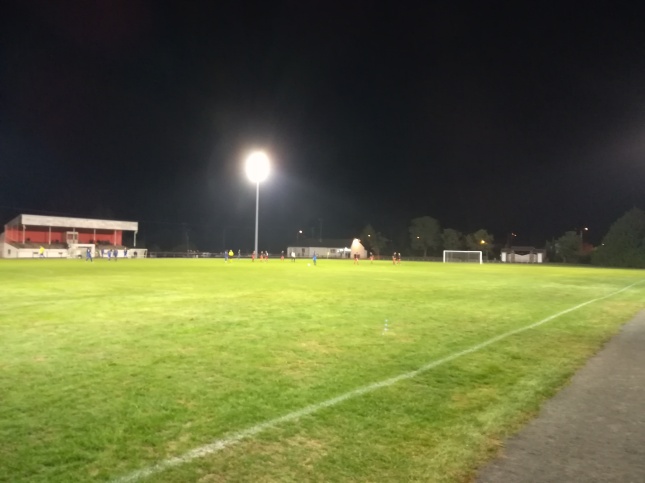 Back at my old stomping ground

AS L were clearly the better side and looked much more of a threat against the visitors who had a guy my age up front. He was more mobile than me and clearly had a bit experience using his dwindling physical abilities to their maximum. There were few familiar faces in the crowd – a couple of guys I recognised who used to play for SYlP – and I edged towards the bar as the half wound down. A half in which AS L had done everything except score. Being first in the bar I was greeted by a surprised Phillipe who I’d got to know a little during our previous stay. He was behind the bar and is currently the President of SYlP FC mainly it seems for administrative purposes. We had a quick chat before others arrived for a drink and to warm up from what was for them a cool evening. 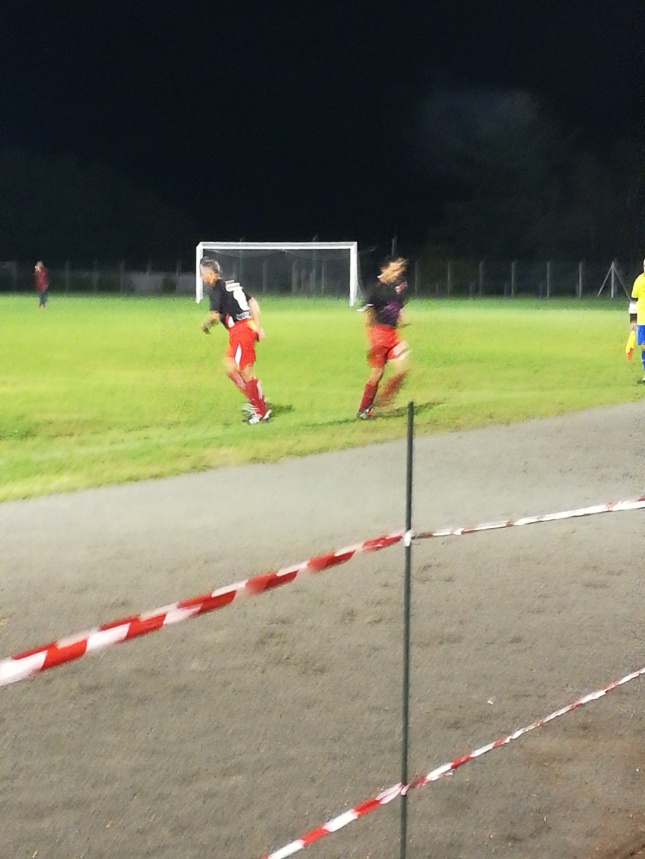 You can win with Grandads!

The second half brought more control of the game by AS L who made the visiting keeper make save after save. The home custodian had nothing to do and was helpless when a rare cross was deflected to the feet of the erm experienced striker six yards out. He put it in turning away more with a look of surprise on his face than joy. AS L pushed on the last 20 minutes was one way traffic during which the home keeper made a few decent saves and one absolutely brilliant one leaping to his left to touch a vicious strike just over. The visitor’s lone front man was replaced by a guy who was a few years older and did very little. The visitors who were in the bottom three of the league hung on and were very chuffed at the final whistle.
AS Ladignac 0, Chateauneuf Neuvic B 1 – Haute Vienne Departmental 3 – Poule C – 3rd Tier in Haute Vienne

The following Sunday the 11th – as were killing time waiting for the house stuff to move on – I drove to Bosmie L’Anguille using Mlle Sat Nav. I arrived in time for the 3 o’clock kick off but couldn’t find the ground! Eventually having consulted an old-fashioned roadside map I arrived a few minutes into the game. AS L had it appeared at first no fans other than a random Scottish bloke but as the game wore on it became clear that a wee group of young women had also travelled at least one of them to watch their boyfriend face Bosmie Charroux.

The open end of the building is the bar/aid station

AS L’s 11 opened the scoring after a shot from the number 8 hit the bar. The AS L number 9 almost doubled the lead in acrobatic fashion at the far post but got it all wrong and it remained 0:1 at the half. In the first period I was flummoxed to see the ref produce a white card which meant 9 had to go sit on the bench for 10 minutes as punishment for dissent.

At half time the home goalie – who made me look like an athlete – did not join his team mates in the changing room instead he was in the bar area having his upper thigh strapped chatting to the locals! The big lad in goals for the home side was not mobile to start with and was a spectator when AS L’s number 7 got onto a through ball and chipped him. AS L continued to look more dangerous and but the home side’s best player hit the bar with a lovely curled free kick before the hosts got a goal back.

I was again defaulting to French for the basic stuff but good a funny look of another visiting fan when I said perfectly reasonably “Good ball!” AS L’s 11 scored with a splendid dipping volley from outside the box before the blue and black number 10 – fresh from a wee seat on the bench prompted by a white card – played a great defence splitting pass from inside his own half. The AS L number 8 ran onto it, controlled it nicely before slotting the ball home in the last action of the match.

Bosmie-Charroux 1, AS Ladignac 4 – Haute Vienne Departmental 3 – Poule C
The result took AS L up the 3rd place in the 12 team league. 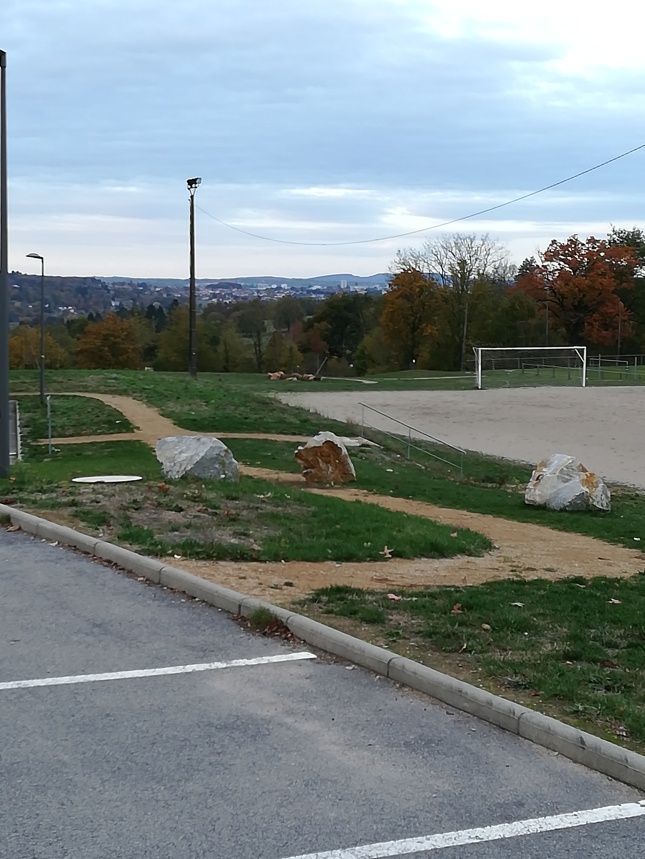 View of Limoges from the car park